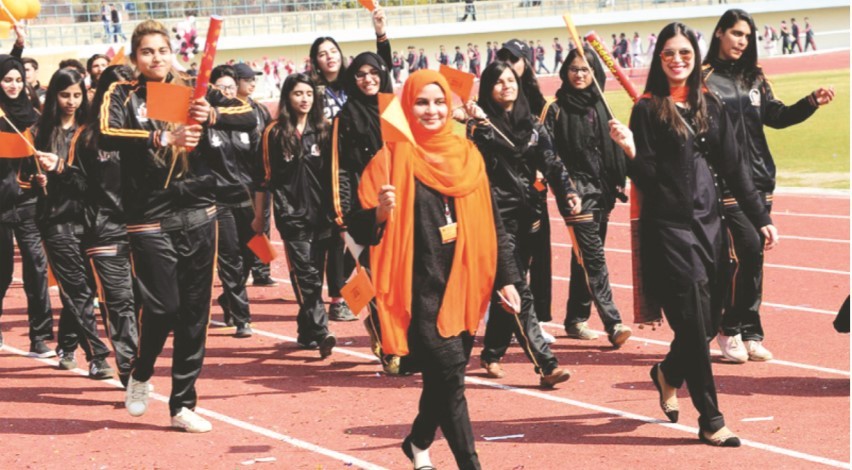 The history of Government College University Lahore, one of the most accomplished and premier education institution of Pakistan, was initially compiled by an Englishman HLO Garrett and Mr Abdul Hamid.

The one hundred years history of the college covers the period from 1864 to 1964.

The book not only has interesting details of college’s evolution and the dedication of its staff and students that made Government College a beacon of quality education in Pakistan but also describes in detail how important sports was in the college that produced great sportsmen like Khawaja Junaid, Shafqat Rana, weightlifter Wahab Imran Butt, international Rower Faraz Hafeez, Hafiz Irfan, and the badminton maestro Altaf Hussain Shah.

I would thus take the liberty to quote directly from the book “A History of Government College Lahore, 1864 – 1964” and see what kind of place the sports occupied in the culture of the College that made it a brand that we all recognize today.

While describing the importance of athletics, on the page 116 to 118 the author states: “Want of grounds and want of money were a heavy handicap; but the want of an athletic, or sporting spirit was still heavier, and very little use was made of the meagre grounds available. After the reopening of the College in the middle of October, teams to compete in the University Tournament were suddenly galvanised into a feverish activity; but, far from considering the honour of representing the College a sufficient reward, players who ‘fancied’ themselves, considered that they honoured the College by condescending to play for it, and that their services should be rewarded by a free gift of suitable kit and clothes from the Professors, or from the funds of the Union Club.”

Regarding the sports subscription, the author states that the subscription to the Union Club was two annas a month, and out of these subscriptions fifteen rupees a month were credited to the Sports Fund,” for the maintenance of cricket, football, tennis, and gymnastics.

The expenditure of these two months frequently exceeded the income of the Sports Fund for the year, and the Professors had to subscribe to make up the deficit.

The tournament games were played in a bitterly partisan spirit, and frequently the relations between colleges extremely strained. Sometimes ill-feeling culminated in broken heads, and for a time the University had to discontinue the cricket and football tournaments, or hold them on grounds with a gate, to which only students with tickets and in charge of Professors were admitted.

Those who cannot look back cannot appreciate the great advance which has been made. Grounds have been improved and enlarged; subscriptions have been raised to provide an ample supply of sports gear; athletics have been made compulsory for all students, and are kept up throughout the academic year. There has been a marked improvement in the physique of the students, and playing under the supervision of their Professors has done much to train their character, to make them sportsmen and gentlemen.

College athletic sports, on a small scale, were held for the first time in 1901, the prizes being given by the Professors.

These class competitions, from which winners in the open competitions were debarred, did much to encourage fresh men to take to athletics from the beginning, and to popularise athletics among the general body of the students.

While describing the emergence of field hockey the author states that it was started in 1902. It took the place of football in hot weather. The only hockey tournament in those years was the Lahore and Main Mir Hockey Tournament started by VH Wilson of the Aitchison Chiefs’ College, which took place in July. The College team entered for this regularly, and fought many a good fights. Hockey was a favourite game at the College. Its players maintained a high standard of the game and presented a picturesque sight in their uniforms in the course of their practice matches in the Oval every evening.

Later Ravi complained that very few collegians went to witness the University matches and those who found time to go to the University grounds stood like deaf and mute spectators. The cheering parties of the former days were no longer visible. The only College club mentioned in the despatches was the Bicycle Club which arranged races on every Sunday, the competitors turning up regularly.

Dilawar Hussain was easily the most outstanding sportsman of the period. He became a legend for his exploits on the cricket field. With every throw of cricket ball he used to send out the cry ‘Hai Allah Ji”.

“Our College has not produced the like of him for many years,” was the parting tribute of the College magazine when he left in 1926.

Later he went to Cambridge where he studied History and Law, played cricket and was described as a friend of peers and princes.

Abdul Hamid, who earned the nickname ‘tooty’, was rising to fame for the style, speed and energy of his sporting feats at the College and University sports.

It was literally impossible for him to carry all the prizes that he won on the Sports Day and he had to bring along his younger brother to help take home a bagful of trophies.

The College maintained three hockey teams and promotion from junior to a senior team was determined by rigorous and efficiency tests. On the Government College courts (then occupying the open space between the old and the new blocks of the College building) were played all important University Tennis matches.

Volleyball became a full-fledged club in 1927. Ignored in the beginning, it had to fight its way to recognition. A series of resounding victories, won in 1931-32, placed it on the sporting map of the College.

The Government College was the first in the province to start its Boxing Club in 1928 which began with a membership of thirty. A private was engaged as a coach. A year later, the Club came to have 43 members and the Principal reported that it had come to stay. Regular instruction and continuous practice raised the standard of the game. The boys learned to fight doggedly and lose gracefully.

Water polo began about the same time as the Boxing Club. Basketball was added in 1931 and its court was located in the neighbourhood of the Physics Laboratory. In January 1928, a boat called Armilla, named after a craft in the fleet of the Cambridge University, was launched by the Boat Club.

The Gymnastic Club came into its own in 1932 and the Gymnasium was extended by 40 feet to provide more space for physical exercise.

A miniature Rifle Club was started to provide shooting practice to the members of the University Training Corps. It started with two rifles and a small range.

To improve the standard of swimmers, a large mirror was fixed along the shallow end of the tank to enable the swimmers to develop and improve their style.

Football began to recover its popularity around 1931. The reawakened interest in this game was said to have created a common interest, or perhaps common ground, between University students and British soldiers.

The growth of physical activities in the College brought greater importance to sportsmen. The requirements of athletic life were more readily met than those of academic life. Most of the talk going on in the corridors and the Library centred round cricket and every sportsman had a circle of admirers.

Under Dunnicliff, a dedicated principal, the Sports Board was reorganised and the rules of its business were laid down. Presidents of various games were made directly responsible for all heads of expenditure incurred on their clubs. The duties of captains and secretaries were also defined.

Cricketers became leaders of the College community. Classrooms would be deserted when an important cricket match was being played in the city. Those who could not go to the playing field would sit by the wireless listening to a commentary on the game. The College won a distinctive place on the cricket map of the country; some of the cricketers became household names in the province.

Sirajuddin managed to send abroad one or two College cricketers every year out of funds made available either by the College or some outside club with resources.

The Mountaineering Club was organised in 1959 in co-operation with the Rovers Crew whose Annual Camp Fire had become a College festival.

With decline in every aspect of our social life and education standards came a gradual decline in the sports of the worthy institute. Government College University and many other great academic institutions in the country need committed leadership like that of Dunnicliff, Garrett and passion of Abdul Hamid.

Our education institutions must produce leaders and sportsmen that are needed in all walks of life.