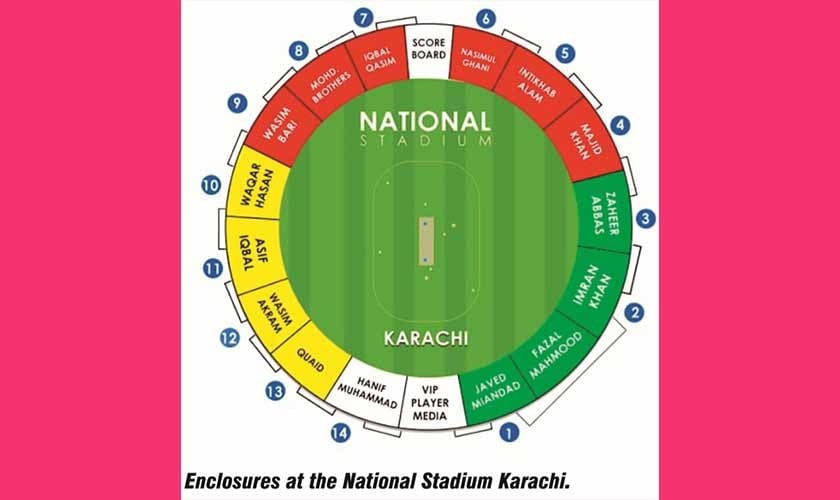 The stadium was designed and built by the well known architect Nasreddin Murat Khan who is better known for designing the Minar e Pakistan in Lahore. Murat Khan was born in Dagestan in Russia in a Muslim Caucasian family. He was an active supporter of the movement to free Caucasian territories from Soviet control and had to flee from the USSR, landing in a refugee camp in Germany in 1944. There, in 1946, he met and married another refugee Hameeda Akmut who had mixed Turkish and Pakistani ancestry. The couple migrated to Pakistan in 1950 and Murat Khan worked for the Pak PWD, before setting up his own architectural firm, Illeri N. Murat Khan and Associates, in 1959. He designed numerous important buildings including the Nishtar Hospital in Multan, the Jamia Mosque in Mirpur, the Fortress and Gaddafi stadiums in Lahore and of course the Minar-e-Pakistan.

In 1996 the stadium was renovated for the World Cup by another famous architect Nayyar Ali Dada who gave its facade a Mughal touch. As a consequence of this re-do the capacity of the stadium was reduced significantly from 60,000 to 27,000. It also became the first stadium in Pakistan to acquire modern floodlights.

The first Test played at this stadium was against Australia in November 1959. Incidentally, this was also the first first-class match to be played at this ground. Since then a total of 40 Test matches have been played at the Gaddafi Stadium of which Pakistan has won 12, lost 6 and drawn 22.

Pakistan lost its first two matches at the GSL. In the inaugural Test against Australia in 1959, despite a heroic rearguard action by Saeed Ahmed who scored 166, Australia won with twelve minutes to spare before the end of the match. In the next Test that Pakistan played here against England in October 1961, they led after the first innings but a dismal batting performance in their second knock resulted in England winning by five wickets.

Only four Test matches were played at the GSL in the 1960s and each one of them drew a massive crowd. Interestingly the two Tests staged in 1969 against England and New Zealand, were both reduced to four-day events, as the cricket board had problems with guaranteeing the security of the players in that politically turbulent year.

The highest innings score by a team in a Test at the GSL is 699 for 5 wickets by Pakistan against India in December 1989. The lowest innings score is a paltry 73 all out by New Zealand in 2002, in reply to Pakistan’s total of 643. Shoaib Akhtar was unplayable in this innings, taking 6 wickets for only 11 runs. Pakistan won this match by an innings and 324 runs, which is the biggest margin of victory ever recorded at this stadium.

Mohammad Yousuf has been the most successful batsman at the GSL with 1125 runs from 11 matches at an average of 93.75, including five centuries and five fifties. A total of 78 centuries have been recorded at the GSL, including one triple century and nine double centuries. The highest individual score is 329 runs scored by Inzamam-ul-Haq versus New Zealand in 2002.

The highest partnership in a Test at the GSL is the opening stand of 410 runs between the Indian pair Virender Sehwag and Rahul Dravid in 2006. Interestingly, this partnership started on the second day of the match and was finally broken on the fifth and final day. The highest partnership by a Pakistani pair is a 319 run stand for the fourth wicket between Younis Khan and Mohammad Yousuf, which was also compiled in the same match.

Imran Khan holds the record for the highest number of test wickets at the GSL, with 56 wickets from 11 matches at an average of 17.63. The only other bowler to take 50 wickets here is Abdul Qadir with 51 wickets. On 39 occasions a bowler has taken 5 wickets in a test innings, with the best performances being Qadir’s 9 wickets for 56 runs against England in 1987 and Imran’s 8 wickets for 58 against Sri Lanka in 1982. There are 5 instances of bowlers taking 10 wickets in a test match, the best being Imran’s 14 wickets for 116 runs versus Sri Lanka in 1982.

Wasim Bari has been the most successful wicketkeeper at the GSL with 26 dismissals in 10 tests. Four keepers have made five dismissals in an innings, namely Imtiaz Ahmed and Rashid Latif from Pakistan and the Australians Wally Grout and Phil Emery. Wally Grout’s eight dismissals in 1959 is the highest wicket keeping tally for a match.

Saleem Malik has been the most successful fielder with 13 catches in 13 tests. The captaincy record for the ground is shared by Imran Khan and Javed Miandad who’ve both led the side on six occasions at the GSL.

Miandad, in fact, began his Test career here, scoring a scintillating 163 on debut against New Zealand in 1976. This was the eighth Test match to be staged at this ground and brought the first win for the home side. Miandad, after scoring a century on the opening day, sealed a win with a huge six on the fourth day. Miandad also played his 100th Test at the Gaddafi Stadium, against India in December 1989, and celebrated the occasion by notching up another century score, this time of 145.

Gaddafi Stadium has hosted 61 ODIs. Of these Pakistan has featured in 51, winning 31 and losing 18, while one match was tied and one ended in a no result. The highest innings score in an ODI at the GSL has been 375 for 3 wickets by Pakistan vs Zimbabwe in May 2015, while the lowest total is 75 by Pakistan against Sri Lanka in January 2009.

The first ODI at the GSL was against England in January 1978, and was attended by the British Prime Minister James Callaghan and the Pakistani President General Zia-ul-Haq.

The highest individual score in an ODI at the GSL is 139 not out by Ijaz Ahmed for Pakistan against India in October 1997, while the best bowling figures were returned by Lance Klusener when he took 6 wickets for 43 runs versus Sri Lanka in November 1997. Shoaib Malik has been the most successful ODI batsman here with 1030 runs from 23 matches at an average of 54.21, followed closely by Mohammad Yousuf who scored 946 runs in 22 matches at an average of 52.56. The most successful bowler has been Wasim Akram with 23 wickets in 18 matches at 27.00 runs per wicket.

A total of 35 ODI centuries have been scored at the GSL while on 21 occasions a bowler has taken 4 wickets or more in an innings.

The first T20 at the Gaddafi Stadium took place in May 2015. A total of eleven ODI’s have been played here of which Pakistan has won 7 and lost 4. The top innings score in a T20 at the GSL is 197 runs for 5 wickets by Pakistan versus the ICC World Eleven in September 2017, while the lowest innings score is 101 all out by Pakistan against Sri Lanka in October 2019. The highest run chase was Pakistan’s winning total of 176 for 8 wickets against Zimbabwe in May 2015.

The highest individual innings in a T20 at this venue is 89 by Ahmed Shahzad versus the ICC World Eleven in September 2017 and the best bowling performance was 4 wickets for 13 runs by Mohammad Amir against Sri Lanka in October 2017.

The Gaddafi stadium has fourteen stands named after famous Pakistani cricketers. The two ends of the pitch are known as the Pavilion End and the College End, the latter being named after the Forman Christian College in the vicinity. GSL houses shops and offices under the stands and is also the home of the Pakistan Cricket Board. In 1996 it joined a select group of stadia which have had the honour of hosting a World Cup final.

Dr Salman Faridi is a senior surgeon, poet, sports aficionado and an avid reader with a private collection of over 7000 books. [email protected]