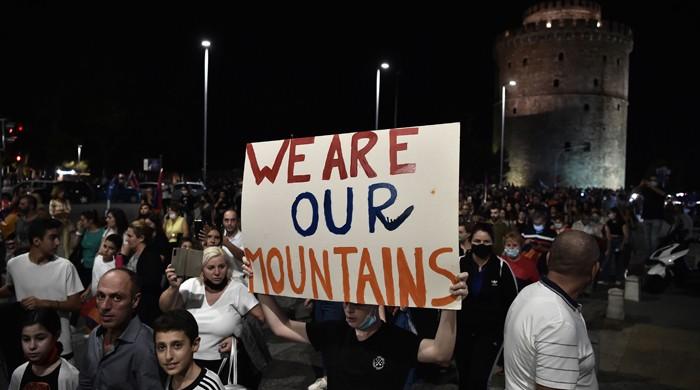 ISTANBUL: Turkey on Sunday condemned what it said were attacks on civilians by Armenian forces on the Azerbaijani city of Ganja in the conflict over disputed breakaway region Nagorno-Karabakh.

“Armenia’s attacks today targeting civilians in Azerbaijan’s second largest city Ganja are a new indicator of its stance that does not recognise law. We condemn those attacks,” the Turkish foreign ministry said in a statement.

Turkey backs Azerbaijan in the decades-long dispute over the ethnic Armenian breakaway region, which Baku considers under Armenian occupation.

Turkey and Azerbaijan have strong ties and both consider themselves as “one nation, two states.”

The fighting over Karabakh, which broke out into renewed fighting seven days ago, intensified on Sunday as Armenian and Azerbaijani forces exchanged rocket fire.

Azerbaijan’s defence ministry said Ganja, a city of more than 330,000 in western Azerbaijan, was also “under fire”, while Armenian-backed separatist forces claimed to have destroyed an airbase there.

The Turkish foreign ministry accused Armenian forces of “violating all principles of humanitarian law and attacking civilian settlement areas besides the occupied regions, the scene of clashes.”

“Those attacks show… Armenia will not hesitate to commit a crime of humanity in order to continue its illegal occupation,” the ministry said, branding the country as “the biggest obstacle to peace and stability in the region.”