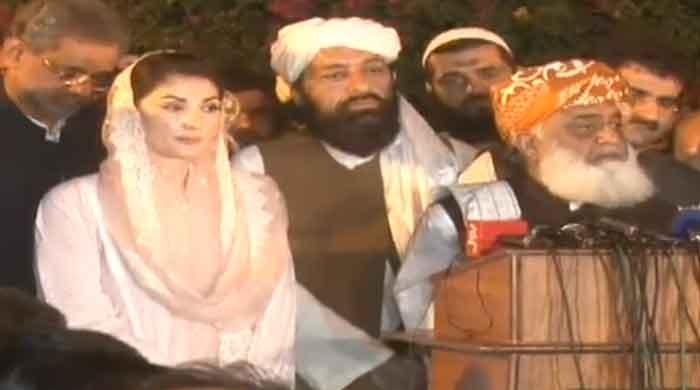 LAHORE: PML-N vice president Maryam Nawaz said Wednesday that the incumbent government was standing on crutches and that it will soon fall under its own weight, assuring people that the alliance will not fall short of their expectations.

We have decided to cross all hurdles,” said the JUI-F chief, addressing the media jointly with Maryam. He said that there was no sign of “good governance” throughout the country. “We want to become a ray of hope for the people of Pakistan.”

However, information minister Shibli Faraz spoke to Geo News, countered the PDM’s criticism, alleging that Maryam was raising “unnecessary issues” and that Fazl, on the other hand, had become “politically irrelevant”.

Fazl said that the upcoming public rallies of the alliance will attract large crowds, adding that its upcoming Gujranwala and Karachi public gatherings will be “huge shows”.

Speaking to media, Maryam lashed out at the government, criticising a recent statement by Prime Minister Imran Khan in which he said that India is happy because of Nawaz Sharif’s speeches.

Speaking about the PDM’s upcoming public gathering in Gujranwala, she said that the government had already gotten scared of the movement. Maryam said that the people of Pakistan were looking towards the PDM with hopes.

“Insha’Allah, I want to assure people that we will not fall short of their expectations under the leadership of Nawaz Sharif and Maulana Fazlur Rehman,” she said.

The PML-N leader said that Fazl will attend the Gujranwala gathering of the alliance and she will also invite PPP Chairman Bilawal Bhutto Zardari to participate in it as well.

Responding to a question, Maryam said that former prime minister Nawaz Sharif and she did not need to prove their patriotic credentials to anyone. “These are cards that are taken out and used time and again, we have been witnessing this,” she said. “At times the patriotism card is pulled out [against the PML-N], at times they pull out the religion card. At times, dharnas take place out of nowhere,” she said.

“Maryam Nawaz is the daughter of this country and Nawaz Sharif is a son of the soil. We do not need to prove anything to anyone.”

Responding to a question, Fazl said that the PDM and the PML-N were not against the Pakistan Army.

Speaking to Geo News, Federal Minister for Information and Broadcasting Shibli Faraz hit back at the opposition, saying that the JUI-F chief wanted an election according to his own desire.

He criticised the PDM leader for accepting the results of his son’s victory but rejecting them when it came to the constituencies his party lost.

“He wants to contest [elections] in front of an umpire that is his own, nominated by him and comes up with the results he desires,” said the minister.

Faraz said that Fazl had become “politically irrelevant” hence he was trying to do something that would propel him once again into the limelight. “The people of Pakistan will not accept him,” he said.

The minister criticised Maryam as well, saying that she was trying to instigate the people to defend her corruption. “Her moral standing is quite damaged, I don’t think anyone will take her call [to protest] seriously,” he said.

He said that the PDM leaders were “campaigning for their personal interests” and that it was up to the people whether or not they wanted to support persons who were struggling only for their vested interests.

Responding to her criticism on the government’s Kashmir policy, Faraz said that the PML-N vice president was twisting every issue and trying to project it in front of the public as she wanted them to see it.

“The public does not have any interest in these matters,” he said, adding that Maryam was raising “unnecessary issues”.