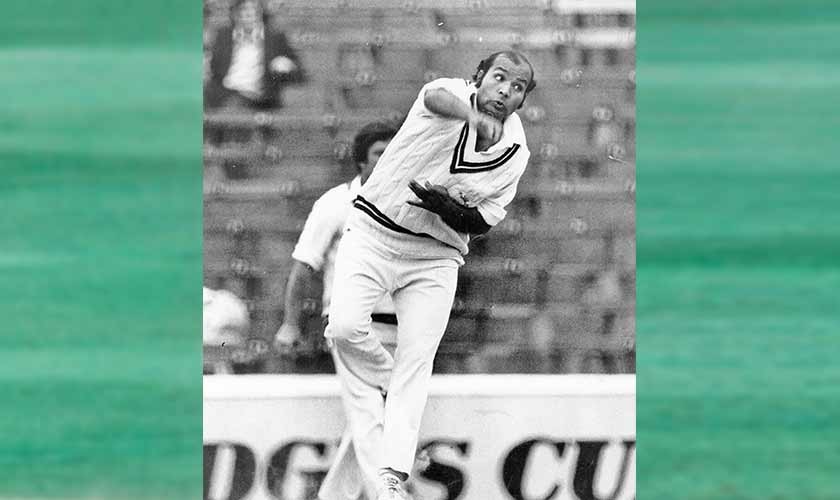 Intikhab enjoyed a long first class career, lasting twenty five years from 1957 to 1982. He played for Karachi and PIA in local tournaments and also represented Pakistan with great distinction in 47 tests. Intikhab had a lengthy stint in county cricket as well, playing for Surrey from 1969 to 1981. A burly leg spinner his stock delivery was a flattish leg break bowled with great accuracy, but without too much variation of pace or flight. Though he possessed a good googly, his best delivery was the flipper which kept low and skidded through to catch batsmen unawares.

Intikhab’s 1571 wickets is the highest haul of first class wickets by any Pakistani or Asian bowler. Of this tally 629 wickets were taken while playing for Surrey and 447 when representing the national side in Tests and first class games. An economical bowler, Intikhab would often buy his wickets as shown by his strike rate of almost ten overs per wicket. The bowling feat that he is probably best remembered for is getting a wicket with his first ball in Test cricket, bowling Colin McDonald in the closing minutes of the second day of the 3rd test versus Australia at Karachi.

A short, ebullient leg spinner, Mushtaq made his first class debut in 1987 at the age of 16 and two years later he was in the national side. He joined Somerset in 1993 and played for them till 1998. After an unproductive season with Surrey in 2002, he joined Sussex the following season and really blossomed. In five seasons at Sussex he took 459 wickets, including 5 wickets in an innings on 39 occasions and 10 wickets in a match 15 times. He took over 100 wickets in both 2003 and 2006 and his efforts were instrumental in Sussex winning the County Championship thrice in these five years. Of his 1407 wickets 775 were harvested in county cricket.

Mushtaq had an energetic, bouncy run up to the wicket and a delivery characterised by flailing arms at the point of release. He teased and tormented batsmen with his guile and multiple variations of delivery, flight and bounce. Wisden described his googly as indecipherable. A true magician, he had moulded himself on another Pakistani legspin wizard Abdul Qadir. Mushtaq retired from first class cricket in 2008.

A legend in his own time, even before he stepped into politics, Imran is the man behind the fast bowling revolution in Pakistan. Picked for the national side at the age of 18, he began his bowling career as a medium paced in-swing bowler. This continued to be his style even in his early days in England when he played for Oxford University and then Worcestershire. It was through sheer tenacity and grit that Imran worked hard on his action and fitness and re-modeled himself as an express paceman who was ranked amongst the fastest in the world. At Sussex where he played from 1977-88, a fast wicket at Hove and guidance from the English speedster John Snow helped this development. Imran also became a leading exponent of reverse swing, which he learnt from Sarfaraz Nawaz, and this gave him a distinct edge over his pace rivals of the time evident in his unmatched strike rate of a wicket every forty balls.

When he was at his peak in 1982, he suffered a stress fracture of the tibia that kept him away from bowling for almost two years. Despite this, in the decade from 1978-79 to 1988-89, Imran took 739 wickets at an average of merely 18.37. Of his 1287 wickets Imran took 633 on the county circuit or while playing for Oxford University and 493 scalps for Pakistan in Test and first class matches.

Imran’s protege Wasim Akram had a long and illustrious career extending from 1984 to 2003. Besides playing for Pakistan and various domestic teams in local tournaments, he spent a decade with Lancashire through 1988-1998, and also had a season with Hampshire in 2003.

Arguably the best left arm pace bowler of all time, Wasim was a master of swing and seam. A short run-up followed by a fast, explosive arm action, reverse swing, deadly yorkers and express pace gave him a unique place in the pantheon of bowling greats.

He not only has a good strike rate of 48 balls per wicket but was also difficult to score off, as is evident from an economy rate of 2.69. Wasim’s tally of 1042 wickets include 394 in county cricket and 585 while playing Test or first class cricket for Pakistan. His average of 21.64 runs per wicket is the best in this group.

The third leg spinner in this elite group, Kaneria began his career 1998 and saw a premature conclusion to it in 2012 on account of alleged match fixing. In addition to playing for Pakistan and local domestic teams, Kaneria represented Essex from 2004 to 2010.

Lanky Kaneria imparted considerable spin to his leg breaks and had a very well disguised googly. He could also bowl long spells with immaculate control over line and length and his height gave his deliveries considerable bounce off the wicket. Amongst his long spells was one at Karachi in 2004 against Sri Lanka when he bowled 60 overs in an innings and ended up with a bleeding finger.

Of his 1024 wickets, 307 were taken for Essex and 286 while representing Pakistan or playing in domestic first class games.

Sarfaraz is acknowledged as the father of reverse swing, a skill he learnt when bowling on grassless, dusty Pakistani wickets. Besides playing for Pakistan and different domestic teams, he spent thirteen years with Northamptonshire from 1969 to 1982. Tall and strongly built, Sarfaraz could move the ball both ways off the seam at fast medium pace. He was spotted in the nets by the Northamptonshire captain Roger Prideaux, who was touring Pakistan with the England team in 1968-69 and he offered Sarfaraz a county contract.

Along with Mushtaq Mohammad and Bishen Bedi, Sarfaraz formed a strong overseas nucleus for Northamptonshire and 511 of his 1005 wickets were taken for the county. He also took 329 wickets while playing for Pakistan or in first class games in domestic cricket. He is also remembered for a 33-ball spell against Australia in Melbourne in 1979, in which he took 7 wickets for 4 runs to reduce Australia from 301 for 2 wickets to 310 all out. He took 9 wickets for 86 runs in the innings with the remaining wicket falling to a run out.

Three Pakistani bowlers were left stranded between 900 and 1000 wickets, with one of them tantalisingly close at 999 wickets. Iqbal Qasim was perhaps not even aware of how close he was to the magical mark and as for Mushtaq Muhammad had he reached this milestone he would have achieved the rare honor of 30,000 runs and 1000 wickets in first class cricket.

So near and yet so far

Dr Salman Faridi is a senior surgeon, poet, sports aficionado and an avid reader with a private collection of over 7000 books. [email protected]