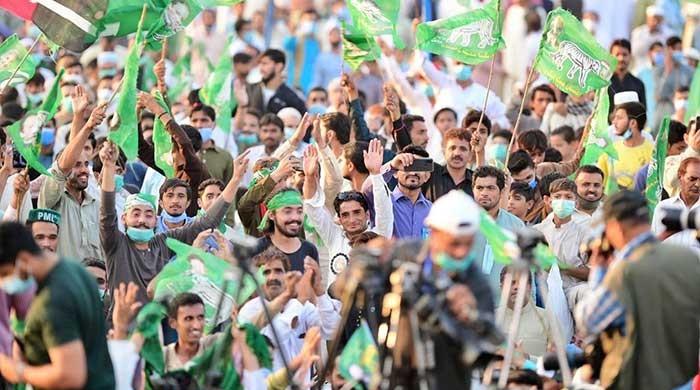 LAHORE: PML-N vice president Maryam Nawaz, a self-dubbed “foot solider” has departed from Lahore for the first  Pakistan Democratic Movement rally to be held in Gujranwala.

“I embark on this mission as your foot soldier, Nawaz Sharif. I have dedicated myself to your struggle, your mission for Pakistan and its people,” Maryam tweeted as she left her Jati Umra residence in Lahore for Gujranwala’s Jinnah Stadium.

The recently-formed Pakistan Democratic Movement (PDM) has announced it will hold a series of protest rallies in major cities in the next couple of months to oust the “selected” government of Prime Minister Imran Khan.

Maryam hoped that she returns “triumphant and victorious”. Before her departure, she also held a special prayer.

Speaking to supporters outside her residence, Maryam said that the Opposition were coming out on the streets today for the rights of 220 million people, and appealed to the people to join her caravan.

Meanwhile, PDM chief Maulana Fazlur Rehman, addressing a press conference before his departure from Lahore, said that his caravan will meet Maryam Nawaz’s caravan at some point and they will enter Gujranwala together.

Talking to reporters, Fazl said that all Opposition parties were “committed” and there “should be no perception that some political force is looking for any reconciliation or thinking of it”.

Lashing out at PM Imran Khan, the PDM chief said that the “situation has changed” with regards to the NRO, claiming that it was the premier who was now seeking an NRO from them.

“We are out to remove an unelected parliament,” said the PDM chief, adding that general elections should now be held.

According to details, PDM chief Maulana Fazl will lead the JUI-F caravan from Lahore’s Jamia Ashrafia to Gujranwala while the workers and supporters of the party have been directed to reach the rally venue directly.

PPP Chairman Bilawal Bhutto Zardari, addressing a press conference in Lala Musa, said his party has made a lot of sacrifices for democracy.

Bilawal complained that his party workers were being harassed by the authorities, reminding PM Imran Khan that he had promised to let political rallies be held in his first speech.

“You said in the first speech that you will give us container and food. But [you have] kept containers on our way. Imran Khan you cannot prison peoples’ ambitions,” said Bilawal.

He also invited every Pakistani to become part of the PDM and end the “joke” that is going on in Pakistan for the last 70 years.

Meanwhile, a report sent to the Punjab government stated that a gross violation of safety protocols has been observed in the rally participants.

Not only the rally participants, but the people at the rally venue in Gujranwala were found not wearing any masks.

Furthermore, the convoy Maryam is travelling with is also not taking any safety precautions, the report said.

The Punjab government will take “necessary action” in view of the reports received.

The opposition alliance was given permission on Thursday after the Gujranwala District Administration and the PDM reached a 28-point agreement on how the jalsa would be held.

The agreement states that all coronavirus SOPs will be strictly implemented throughout the jalsa, and that attendees will not enter the jalsa venue without masks and sanitisers.

The organisers will also have to install walk-through gates and sanitisers at the entrance and exit gates of the venue. Cars will be allowed to be parked at a distance from the venue of the jalsa. The PDM will arrange lighting at the venue and ensure there is no display of weaponry or fireworks at the venue.

The seating arrangements will have to be such that there is a 3-6 feet distance between the attendees at all times.

The PDM has also been told that none of its leaders are to make speeches at any place other than Jinnah Stadium, and there will be no ‘welcoming camps’ at GT Road.

The two parties have also agreed that there will be no wall-chalking/graffiti in relation to the jalsa, and that party banners will be put up after securing permission from the relevant departments.

The district administration has also secured guarantees that the speeches being made will not target any national security institutions or make any statements that may conflict with the Constitution.

In case of the violation of the agreement, the district administration will be entitled to take appropriate action and register cases against the PDM leaders.