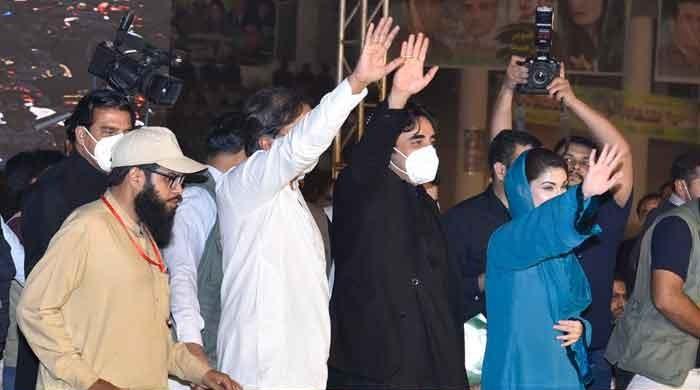 GUJRANWALA: The Pakistan Democratic Movement (PDM) on Friday criticised Prime Minister Imran Khan, warning him that the days of his government were numbered, at a packed venue in the city.

Addressing a gathering of thousands at the venue, Maryam Nawaz said that she was fighting for the businesses that had been destroyed during the incumbent government’s tenure and the journalists who were being censored.

“People [journalists] who stood with the truth were fired from their jobs,” she said. “I have come to present the case of the Lady Health Workers as well before you, who are languishing on the roads of Islamabad.”

Maryam said no one had the right to oust elected representatives of the people. “It is you [masses] who should form governments and oust them as well,” she said.

Referring to the Panama leaks court judgement, the PML-N vice president said that those who referred to the Sharif family as a “Sicilian Mafia” now knew what the term mafia means.

“All they could find from Nawaz Sharif’s corruption was the Iqamah,” she said. “They used to refer to us as the Sicilian Mafia, I’m sure now they know what a mafia really is,” said Maryam.

Blaming the government for skyrocketing prices of food items, she said that it was a tactic of the PTI government to ensure food items disappeared from the market. When their prices increase, the food items return to the market, she said.

“Today you have suppressed the media which is why no one talks about your corruption,” she said, referring to PM Imran Khan.

‘Selectors and selected will have to come on our page now’

After Maryam concluded her speech, PPP chairman Bilawal Bhutto Zardari took the stage to lash out at PM Imran Khan and his government, saying that the cricketer-turned-politician did not have any solution to the problems of the poor.

Referring to PM Imran Khan’s statement that the civilian government and the military leadership were on the same page, Bilawal said that “the selectors and the selected” will have to come on the Opposition’s page otherwise they will have to go.

The PPP chairman said that PM Imran Khan had promised, before he secured victory in the elections, to provide 5 million homes to the poor. He said that not a single person had been provided a home since the past two years that the government had been in power.

Targeting the government for not holding people accountable across-the-board, Bilawal lamented how Zardari, Faryal Talpur and Maryam Nawaz were sent to jail on mere allegations of corruption. “But if allegations are levelled at Imran and Aleema baji, no one asks questions about them,” he said.

‘Fake rulers about to meet their fate’

“Fake rulers are about to meet their fate,” he said. “The sun of democracy is about to rise soon. If you remain undaunted, this government will not see the month of December,” added the JUI-F chief.

The PDM president said that the anti-government movement had begun and now, a “sea of people” will rise in Karachi, Multan, Lahore and Peshawar in the coming days.

Referring to the prime minister walking out without delivering a speech in the parliament on Friday, Fazl said that all it took was 15 parliamentarians to “scare away” PM Imran from the assembly.

“He boasts about having the majority in the parliament. Today, 15 members of the Opposition scared off the fake prime minister from the parliament,” said Fazl.

He lashed out at the government, blaming it for resorting to “political vendetta” in the name of holding the corrupt accountable. “Today, all political forces are standing on one platform,” he said.

Telling the public that it will have to come out to seek their rights, Fazl said that the PDM wanted to “hand back Pakistan’s politics back to the people”.

Fazl cited the example of the Soviet Union, adding that it was “eliminated from the world’s map” due to its deteriorating economic situation. “Pakistan is not as strong [as the Soviet Union] that it will be able to maintain its existence [if such a scenario presents itself],” he added.

The JUI-F chief said that everyone knew who was responsible for stoking sectarian conflicts. He said that the JUI-F had always promoted religious harmony, calling on all parties to remain united. “All schools of thought have talked about harmony,” he said.

“Our movement has begun, it will not stop now,” he said. “Our movement will only come to an end when the supremacy of the Constitution is established.”