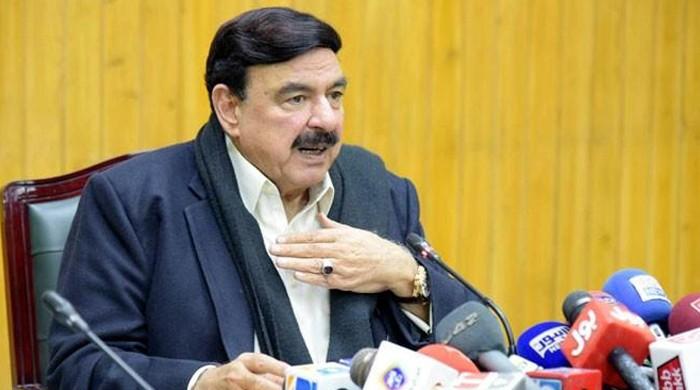 LAHORE: Railways Minister Sheikh Rasheed hit out at former prime minister Nawaz Sharif on Saturday, saying that his politics has no future in Pakistan.

“Your political funeral will come from London. Your politics will not thrive in Pakistan now,” said the federal minister, speaking at a news conference in Lahore.

The railways minister said that he knew about a secret meeting between Nawaz Sharif and another personality that took place in Istanbul’s Renaissance Hotel, but refrained from revealing more.

“Nawaz Sharif, I know about the meeting at Hotel Renaissance in Istanbul [that took place] at 11:20,” he said, putting a finger to his lips. “I am not allowed to speak on it. And I have prohibited myself from speaking about it.”

The railways minister challenged the PML-N lawmakers to resign from the assemblies if they are serious in their campaign against the government. “Hand in your resignations. You will know where you stand,” he said.

Rasheed said that Nawaz was playing a dangerous game against the Pakistan Army, slamming the former prime minister of towing the line of the international powers by tarnishing the image of the armed forces.

“Do they think governments go because of jalsas?” asked Sheikh Rashid. “If their jalsa is compared to Benazir’s 1986 and Imran Khan’s Lahore jalsa, then this was a failed and incomplete jalsa,” he said.

Commenting on the Opposition’s Gujranwala jalsa, the minister said that he had stopped judging political rallies on the basis of numbers. “I judge jalsas by their engagement nowadays,” he said, refusing to comment more on the matter.

He said that the only reason that the 11-party Pakistan Democratic Movement (PDM) was formed was so that Maryam Nawaz could agree to a compromise with the government and fly out of the country.

Talking about former Punjab chief minister Shehbaz Sharif, Rasheed said that the prime minister’s aide Shahzad Akbar would know more about who the PML-N president is meeting with.

He said that if the PML-N continues to “speak the language of the enemy” then it should be banned. “I cannot issue [a notification to ban the PML-N], Nawaz has strangled his own politics. He is a student of Zia-ul-Haq’s academy, is a product of GHQ gate number 4. Never was he a student leader,” said Rasheed.

Responding to a question, the Awami Muslim League (AML) chief challenged Nawaz to return to the country and then mobilise his workers against the government. He said that the PML-N supremo should be brought back to the country to face cases against him in courts.

The Pakistan Democratic Movement (PDM) leaders had last night, in a power show in Gujranwala, warned PM Imran Khan that his days in government were numbered.

Addressing a gathering of thousands at the venue, Maryam Nawaz had said that she was fighting for the businesses that had been destroyed during the incumbent government’s tenure and the journalists who were being silenced.

“People [journalists] who stood with the truth were fired from their jobs,” she had said. “I have come to present the case of the Lady Health Workers as well before you, who are languishing on the roads of Islamabad.”

PPP chairman Bilawal Bhutto Zardari also took the stage to lash out at PM Imran Khan and his government, saying that the cricketer-turned-politician did not have any solution to the problems of the poor.

Referring to PM Imran Khan’s statement that the civilian government and the military leadership were on the same page, Bilawal had said that “the selectors and the selected” will have to come on the Opposition’s page otherwise they will have to go.