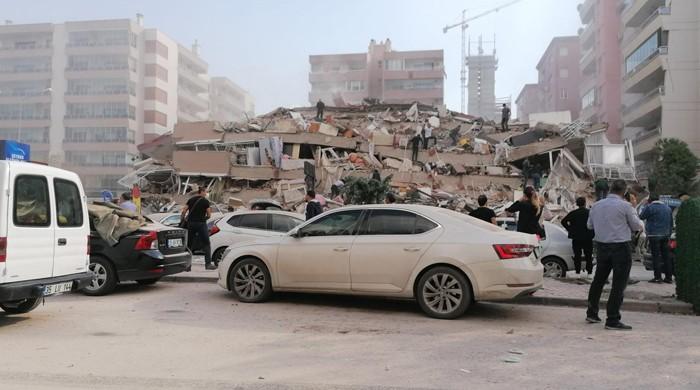 A massive earthquake of 7.0-magnitude hit Turkey and Greece on Firday off the former’s Aegean coast north of the Greek island of Samos, international media reported.

This was revealed by the US Geological Survey (USGS) which added that tremors were felt as far away as Istanbul and Athens.

No casualties have so far been reported but images of buildings reduced to rubble by the earthquake started doing the rounds on social media.

Videos of people searching through various buildings’ debris went viral on social media as well. However, these videos could not be verified.

Horrified at the incident, thousands of people poured onto the streets to be safe from collapsing structures immediately after the tremors were felt.

“So far, we have received information about six collapsed buildings” in Izmir province, which incudes the city, Turkish Interior Minister Suleyman Soylu said on Twitter.

“Some of our fellow citizens are stuck in the rubble,” said Environment Minister Murat Kurum, adding that he knew of five collapsed buildings.

Turkey is situated in one of the world’s most active earthquake zones.

Another quake in 2011 in the southeastern province of Van resulted in more than 600 deaths.